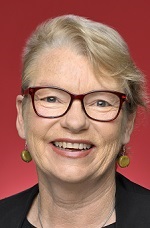 Senator Janet Rice has been a Senator in the Australian Parliament for eight years and a passionate campaigner for justice, people, and the planet for more than thirty years. She was a founding member of the Greens in Victoria and has also served as a councillor and mayor of the City of Maribyrnong in Melbourne’s inner west.

Janet was the Greens Foreign Affairs spokesperson from 2020-2022. Her work is grounded in advocating for Australia to promote peace, democracy, ecological sustainability, equity and justice, and human rights in our international relations. As a member of the Australian  All Party Parliamentary Group for Tibet, Janet has been a staunch advocate for Tibet in Parliament. She has used her position in Parliament to highlight the human rights violations suffered by Tibetans and supported the passage of Magnitsky-style legislation through the Australian Parliament, to enable the application of targeted sanctions against those who commit serious human rights violations.