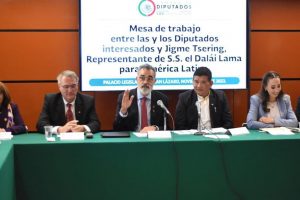 At the formation of the Group of Legislators’ Friends of Tibet in the Chamber of Deputies of Mexico.

This breaching of diplomatic protocol by China in their attempt to control rights of individuals and the leaders of the free countries who have all the rights and responsibilities to support the just cause of Tibet is unethical and against the principles of democracy.

Responding to the Chinese preposterous objection, Deputy Salvador Caro Cabrera said, “The day after the integration of the group of legislators friends of Tibet, in the Chamber of Deputies of Mexico, the Chinese Embassy pushed to be able to come to the chamber, make a visit to the session hall, and has a meeting with our president. From my point of view this is a moral victory for the people of Tibet. Because we are influencing, the cause is recognized against the genocidal policy called ‘one China’. Thank you!  Free Tibet!”

China’s coercing of their dominance over the free nations of world with regard to the Tibet’s issue is not new as there have been many such incidents including when the Chinese Embassy had objected to the participation of Indian lawmakers, parliamentarians of the largest democracy in the world, for attending a dinner reception hosted by the Tibetan Parliament-in-Exile in Delhi on 22nd Dec, 2021, after the revival of the All Party Indian Parliamentary Forum for Tibet.

Inaugural of the parliamentarian group of friends of Tibet in the Mexican congress.